Save $10 on your next Plow & Hearth purchase of $80 or more
by entering the code PHAFUN in the Promotion Code field during checkout!

The Everett Sorticulture show is June 17 and 18th at Legion Park. The show features gardeners, musicians and artists. It's a fun event for young and old alike. You can find some unique art and horticultural items to buy, or get some ideas for making, or growing, your own beautiful things.
Posted by Jack at 1:04 PM

R&B are at the Northwest Folklife Festival at the Seattle Center, today. It's going on tomorrow, Monday, as well. It's a fun family-friendly gathering with food, music and craft/art items for sale.

Betsy and I have been having our own folklife festival at home today. We painted four old picnic table benches white yesterday. Today we are applying our own individual styles to each. Betsy is going for a 60's Mod Flower Power look. My bench is an impressionistic/primitive view of lillies and poppies in honor of Memorial Day 2005. R&B will each paint their own bench, so we will end up with four unique styles to brighten up the backyard a bit, when we are finished. 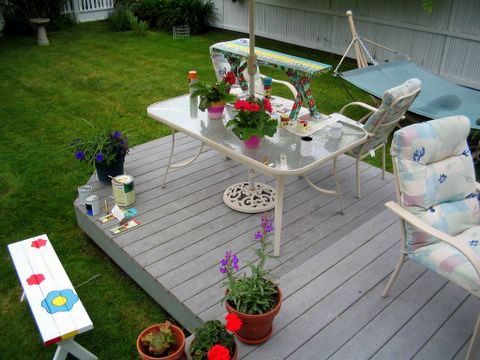 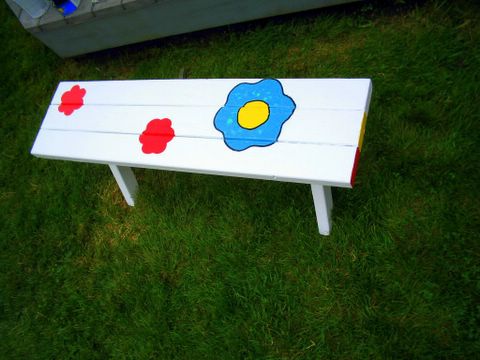 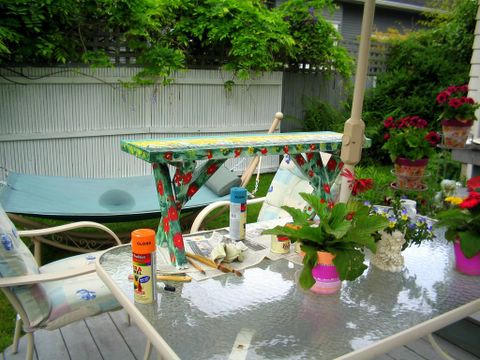 "If you want your smart people to be as smart as possible, seek a diversity of ideas. Find people with different experiences, opinions, backgrounds, weights, heights, races, facial hair styles, colors, past-times, favorite items of clothing, philosophies, and beliefs.

On your own, avoid homogenous books, films, music, food, sex, media and people. Actually experience life by going to places you don’t usually go, spending time with people you don’t usually spend time with. Be in the moment and be open to it." 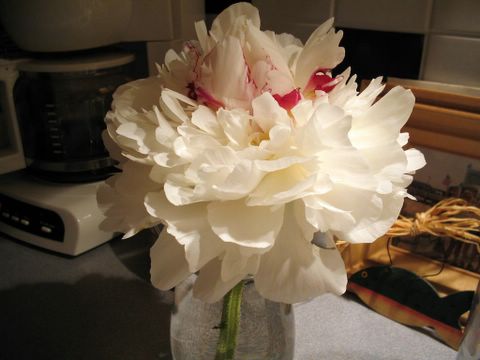 This is a flower from a peony beside my house here in Everett, Washington. It smells good and it's huge (you can get some idea from the size of the coffee pot in the background). The only downside is it's the only flower on the plant this year. That peony has caught a fungus/rust of some sort and can't shake it. This fall I'm going to try cleaning around it really well and see if I can get rid of the blackspot. 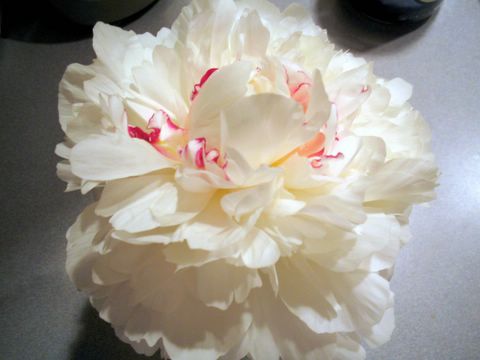 Warm Weekend in the Northwest

It was a nice warm 82 degrees in Everett yesterday, breaking the previous record of 81 degrees set in 1958.

I'm looking forward to a nice relaxing and recuperative weekend. I've been feeling a little under the weather, having picked up a chest cold during the week. Feeling much better now, although still with a hacking/rattling cough.

I enjoyed yesterday's nice weather by sitting in the sun, riding my bicycle, and getting out the power washer to knock loose paint off some benches and a planter that B and R are going to paint and decorate. I might power wash some of the house today, make a small kite, and do some other little odds and ends around the house. It's a nice feeling to not have anything I have to do, although my mind tends to race ahead of me and think of things I could, or should, be doing. Sometimes it's nice to just sit and think, or just sit.

I'm up with the sun this morning, enjoying some strong coffee and some music. I was listening to NPR news earlier. It's hard to listen to the reports of daily terrorist bombings and subsequent deaths of innocent people in Iraq. The report that seemed odd to me this morning was a story about a Navy Seal who was on trial for roughing up an Iraqi detainee. I didn't catch the whole thing but what I heard was that the Seal team had captured a man suspected of bombing a Red Cross clinic. Apparently the Seal lieutenant's team had punched and pummeled the suspect in the process of detaining him. Now the lieutenant is on trial after having supposedly admitted to punching the detainee in the shoulder.

Some things just don't balance on the scales of justice.

That reminds me of the person, rioting in Afghanistan, I heard on the radio who claimed that someone at Guantanomo Bay purportedly flushing a Koran down the toilet had insulted the whole world's Muslim population.

The Koran, like the Bible, the Veda, the Book of Morman or any other religious writing is just that, the written word. The fact that a person believes it to be divinely inspired is a personal decision, but doesn't change the fact that it's a collection of words written on paper.

In the case at Guantanomo, the prisoners have a right to be treated humanely and with an appropriate amount of dignity afforded their person and their religious beliefs. Never having been there, and not knowing what sorts of people may be imprisoned there, I don't know what the proper bounds would be for treatment and questioning within that basic framework of maintaining human dignity. If there was a chance to locate Osama Bin Laden by psychological pressure on a prisoner, or prevent a future terrorist act, I'm not so sure that flushing a book down the toilet wouldn't be called for. Certain acts would be justified in some cases, and not in others (bullying an innocent prisoner for example).

The beauty (and difficulty) of a free society is that people can do things that may offend the sensibilities of the majority, or the minority, provided those actions are not contrary to the rule of law decided by the people.

When I see KKK or neo-nazis making a statement, I don't think "those people have insulted my kind...I'm going to go set off a car bomb and riot in the street" but rather "those hate-filled ignorant people make a good case for planned parenthood, and then I thank God that they are a minority".

I believe in the right of non-violent protest, majority rule and minority rights - all the precious freedoms paid for by the brave men and women who served in the Armed Forces and in the case of many that made the ultimate sacrifice and did not return home - paid for many times over, need to be protected cherished and appreciated.

We have the right to state our opinion, organize a non-violent protest, lobby the government or otherwise become involved to change the law if we believe it needs to be changed.

All in all, I can't think of a better place to live than the USA.


I am going to celebrate this weekend by doing what I want to do, appreciating the fact that I am free, and thanking all those who went before us to ensure we remain free.

12 mos, No Interest Financing on ALL SONY products

Save 5% with Thrifty.com on reservations booked between now and June 30th.
Enter Code AU11.

Facing Toward the Light

Tom Barrett's Meditation of the Week at interluderetreat.com, as usual, has some good advice for relaxation, focus and centering yourself.

Face toward the light and allow yourself to grow healthy, strong and beautiful; filled with love and compassion, ready for another great week of learning and living.

"A Sunflower From Maggie, 1937" by Georgia O'Keeffe

"A Sunflower Field in Provence" by Anonymous

Coffee - Lets Meet at the Cafe

I just finished the "Book of Coffee" by Anne Vantal. It's a good book about the history, cultivation, buying/selling and preparation of coffee.

Some interesting items from the book -

There are two species of coffee, Arabica and Robusta. Arabica originated on the plateaus of Ethiopia and Robusta in the tropical forests of Africa. Robusta, as the name implies, is a more robust variety of coffee. It is also has more caffeine than Arabica and is found in coffee's labeled as "full bodied" meant for morning consumption (or late night for the late night crowd).

There are many varieties of Arabica and Robusta coffee. Coffee trees are in the same plant family as the gardenia. Coffee trees bloom several times a year, producing up to 20 to 30 thousand white flowers per tree, providing a scent some people say is similar to jasmine. The flower's blooms only last for a few hours.

There are two methods to separate the beans from the pulpy cherry; a water washing process and a sun drying process.

Coffee beans are contained within the red cherry on the tree's branches. Each cherry contains 2 beans, except for some special cherries on the ends of branches that have a single bean.

The cherries on a given tree ripen at different times making it difficult to pick them at their peak.

A coffee tree can grow to five or six meters, but they are pruned to lower heights on coffee plantations.

The roasting, storing and preparation of coffee is critical in obtaining the desired flavor. Coffee beans can pick up odd flavors if they are improperly stored in the transportation process. Coffee should be kept in airtight containers, preferably refrigerated.

Espresso produces less caffeine than drip coffee because the caffeine is extracted based on the time the coffee is exposed to the hot water.

Caffeine's effects on the nervous system start immediately but peak about an hour after you drink it, that's why you can sometimes drink a cup of coffee before bed and be asleep before the caffeine kicks in.

The country with the largest per-capita consumption of coffee is Finland, followed by the Scandinavian countries (Norway, Sweden, Denmark).

Coffee and Cafes have been historically associated with music, art, conversation, philosophy and friendship.

"Let's Meet At The Cafe"

"Oriental cafes where rendezvous are made more easily than at home, writer's cafes, artist's cafes, Viennese cafes with newspapers on the side, philosopher's cafes, revolutionary cafes, Bohemian cafes in Paris, quiet cafes ideal for a quick breather, subversive cafes where plots and coup d etats are hatched; the cafe is the perfect place to meet."

From "The Book of Coffee" by Anne Vantal

"The Book of Coffee" by Anne Vantal

"The Boulevard" by Kenny Beberman