Rode about 600 miles Friday and Saturday. It was a good time to be out. Traffic was light and weather was warm and sunny. I really like the area around Republic. The forests and hills remind me of some of my favorite parts of Montana. Highway 21 from the Keller Ferry to Republic parallels the Sanpoil River with some nice rock formations. It passes through the Colville Indian Reservation and National Forest. It's more of a dry country than the forests over here on the wet side of the mountains - smells different, not so moldy.

The Northern Inn in Republic isn't a bad place to stay. My room was 75 dollars and included a refrigerator and microwave. A/C works good, owner is friendly and the deck has some comfortable chairs to sit in and take in the sunset. Anderson's Grocery and a natural foods store are just down the street.

I rode out to the Wings Over Republic fly-in on Friday evening. It looked like most people were camping under the wings of their airplanes and not much going on. I checked out Curlew Lake state park where I camped last year. That's a really nice park, with camping spots on grass, and a swimming area.

The highway was crawling with deer at dusk. Coming up from Curlew lake there was a group of deer standing in the road and one buck ignored my horn and wouldn't get off the road until I kind of aimed my motorcycle at him. There's a lot of deer killed by vehicles in that area of Washington. I wouldn't choose to do much riding at dusk, or after dark.

This is a picture I took from the Keller Ferry. 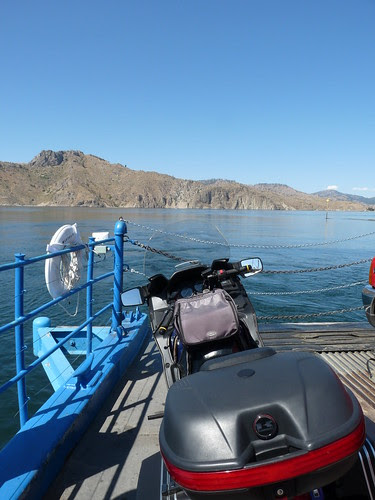 Nice ride home on Saturday on highway 20 from Republic to Tonasket, Omak, Twisp, Winthrop, over the Cascades to Rockport and then south on 530 to Darrington, Arlington and back home. Highway 20 from Republic to Tonasket is 40 miles of mostly downhill riding through open range country, with some nice curves and almost no traffic at 10 am on Saturday. Next time I'm in the area I want to go east from Republic over Sherman Pass (5575 feet) and on to Newport Washington.

I Plan To Do A Lot of Drinking Tonight 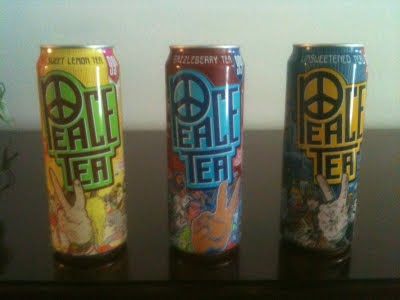 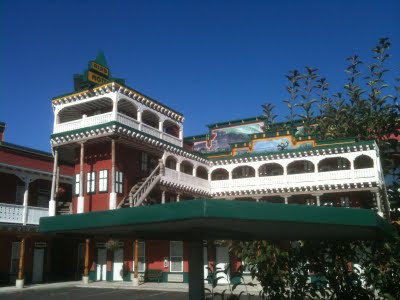 This is where I'm staying tonight. Republic is a pretty little town surrounded by hills and pine trees. The Northern Inn gets good reviews, has reasonable rates and I like it.

Sent from my iPhone

Postscript - Sharp eyed viewers may wonder why that sign says Bird Motel. Okay, that isn't really where I stayed. That's a bird house that looks like the Northern Inn.
Posted by Jack at 6:04 PM 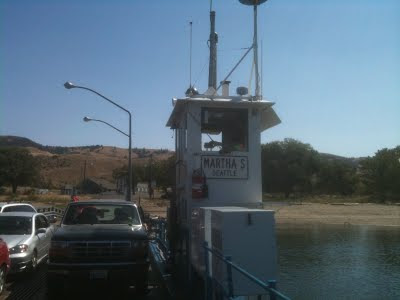 It was fun to ride this little ferry. Nice and cool on the water. I wanted to ride it last year but it was shut down for repairs. It's in the high 90's and sunny. Very nice :-)

Sent from my iPhone
Posted by Jack at 3:50 PM

Looking Down on Lake Roosevelt 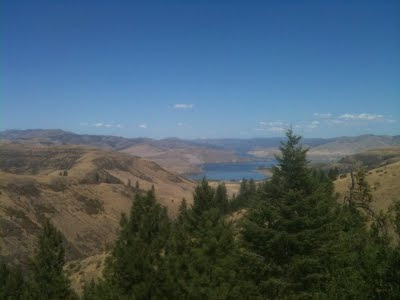 Down there is where you catch the Keller Ferry. I came over the Cascades on Highway 2 and then went north on Highway 21, to the ferry and then on to Republic Wa. I'm spending the night at the Northern Inn here. Lucky to find a room because there's a big fly-in at the airport. Might head out to the airport and Curlew Lake a little later.

Great day for a ride, some really pretty scenery and not much traffic.

Sent from my iPhone

Valley of the Sun

I've been in Phoenix since last Sunday and have been enjoying the change in weather.

Yesterday set a record high for August 18th of 112 degrees. It was hot and sunny until late in the afternoon when a dust storm blew in, followed by rain, lightning and thunder. Airplanes couldn't land or takeoff for 40 minutes at Sky Harbor Airport because of the dust, and the wind caused some damage to homes and loss of power. There were some microbursts in the area - so overall some pretty interesting weather.

Earlier this week we ate dinner at the Different Pointe of View restaurant at the Tapatio Cliffs Resort which was great. Super nice view, ambiance and excellent food. I'd stay at that resort if I was coming here for a vacation. Besides the food and view they have acres of pools, as the website says, "The Falls Water Village offers acres of pools, terraced waterfalls and an abundance of poolside lounges to soak in the sun." Looks fun.

This is a snapshot of my dessert - two types of sorbet and an artistic presentation. It was very tasty. 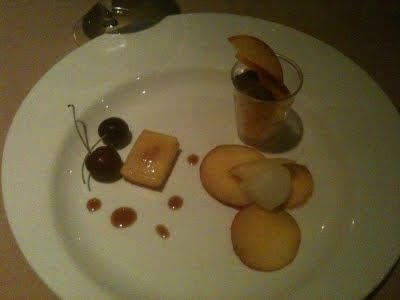 Since this is a business trip I'm out in a business hotel - which is fine too. There's a Greek market and cafe right next door that has good fresh hummus, falafel and pita. There's a pool, workout room and decent food so I'm not complaining.

If I had more time and maybe if it was a little cooler I'd look into renting a motorcycle and heading out into the desert and up into the mountains to Flagstaff.

Rachel learned the hard way that Gopher holes can be dangerous. I'm glad it was a sprain and not a broken ankle - although I've had both and can't really say which hurts more. I suppose it depends.

That's a pretty steep hill they were on. We were riding down it years ago and Tommy's horse slipped and fell which was scary. Good times at Chico.

My Mom's cousin Buzzy used to take care of the horses there. He was a character and a really nice guy. I always liked visiting their house when I was a kid because there were over ten kids in the family, so not a lot of parental supervision. Good times.


I remember one time the twins (there were two sets of twins in Buzzy's family) came to visit us when we lived on the hill in Columbus and set the hillside on fire with firecrackers. I always liked fire as long as it's not a house or nice trees or anything like that burning up.

I got in a little trouble once for using gasoline to burn a C in the hill on that property. I thought it would be a nice symbol for the town. It worked fine except someone from the fire department in town saw the smoke and thought it was a brush fire and dispatched the fire truck. Mom was not pleased.

When I was younger - six/seven we were exploring a dirt cellar in an abandoned house in town. Couldn't see very well cause it was dark so we lit some newspapers on fire to use as torches. That smoke got someones attention, but we were gone by the time police/fire showed up. The town cop came to our house that night. I don't know how they knew I was involved.

Actually the only real out of control fire I was involved in was when we were clearing brush in one of the coulees near the house. I had on old car hood that we used to pull behind the pickup in the wintertime. I thought I could use that hood as sort of an outdoor fireplace to burn some of the brush we'd cut. That worked for awhile until the sparks jumped out and started the super-dry grass and sagebrush on fire. Luckily it didn't spread too far. Thank you - Columbus Volunteer Fire Department.