I like to take my bikes out for some longer rides on weekends to warm them up, evaporate the condensation and enjoy the fresh air and sights. I rode a couple of hundred miles this weekend. My main trip was to Conway, Burlington, Sedro Wooley, Concrete, Rockport, Arlington and back home. The main roads on this run are the North Cascades Highway 20 and Highway 530 that connects Highway 20 at Rockport to Arlington.

It was sunny but with a pretty steady wind and temps around 40 degrees. There was ice on the roads in a few spots up by Rockport and there's snow on the side of the road and on rooftops in Darrington. I'm really looking forward to some temperatures in the 60's and up.

Riding a motorcycle is a great antidote to being inside. It makes going to work and back home a lot more fun. It gives me a touch of the natural world to counteract the time I spend inside. I've ridden 24,000 miles in the last year and a half - somewhere around 5000 miles was commuting to work and the other 19,000 was mostly just fun.

I'm still trying to decide if my next long trip will be North, South or East. I'm thinking of riding up Vancouver Island and catching the ferry at Port Hardy to Prince Rupert. Heading South I'd like to go to Utah and Colorado. East I'd like to take a trip through the small towns along Route 20 from Newport Oregon to Boston.

Next to Normal | 5th Avenue Theatre

B and I are are going to spend the night in Seattle and see Next to Normal at the 5th Avenue Theatre next week for her birthday.
One thing that complicated finding a hotel is that we are taking Crazy Eddie with us. Some places want an additional 100 dollars for a pet. We settled on the Red Lion on Fifth Avenue since it's close to the theatre and pets stay free if you are a member of the R&R club. Edgar will get to enjoy the doggie program which includes his own pillow among other things. 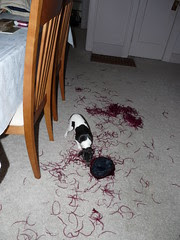 TFT Gone Wild
Originally uploaded by Jack Crossen
I hope we don't have a TFT Gone Wild incident at the hotel. Edgar doesn't tear things up like he did when he was a pup, so I think he'll be fine in the hotel room for the few hours we are at the play.
Speaking of Edgar, we've had a few people come to the door selling ADT Home Security systems. I can only talk to them through the screen door since Ed is barking so loud. He's also jumping a couple of feet up and down - and would love to get outside and bite them. It seems obvious to me that we already have a security system. He's a great dog, but he can be very aggressive around strangers, and he's really quick - so it's next to impossible to catch him.
Posted by Jack at 5:29 AM

I spent Saturday adjusting the chain on the Kawasaki KZP 1000 and adjusting the valves and synching the carbs on the Kawasaki Concours.
Actually I spent about 15 minutes adjusting the chain on the KZP and most of the rest of the time disassembling and reassembling the Concours. Getting the valve cover off, and back on, that bike is a fun puzzle.
I ended up re-adjusting the chain on the KZP after I rode it. The adjustment range is 1.2 to 1.4 inches and I had it on the tight end which was causing shifting to be a little harder than I thought it should be. The slight clunk when I shift is gone now - which is what I wanted. I was a little worried that the chain might be stretched beyond it's service limit, but it wouldn't pull away from the rear sprocket at all so that wasn't a problem. That bike has a heavy 630 type chain which looks like it should last a long time.
________________________________________
It had been about 10,000 miles since I adjusted the valves last summer, but none of them were out of spec. I just tweaked a few back to be in the middle of the adjustment range; which is .006 intake, .008 exhaust. The bike seems to run a little smoother, but it might just be wishful thinking on my part.
I had a new pulse cover gasket but didn't need to use it since the old one came off intact and was in good shape. I went by the book and didn't try the unofficial bump-the-starter, or turning the back wheel, methods to get the cam lobes horizontal. I did try turning the engine over with the spark plugs out by rotating the back wheel - no joy with that method. The whole point of either of those methods is to avoid taking the pulse cover off - so you save maybe 10 minutes and maybe a gasket that cost a few bucks, and risk adjusting the valves at the wrong point; and burning or bending a valve and end up spending hundreds of dollars on repairs. It probably works fine - but I like going by the manual for certain critical things.
_______________________________________
I put a couple of extra bolts in the top case of the Concours to hold it on if the locking latch fails. I never take the top case off anyway so I didn't need the quick removal mechanism.
_______________________________________
I dumped some Shell V-Power gas additive in all three MC's. Not sure why, but it was on sale and I like thinking I'm doing something good for the engine. I figured if it what made by Shell it wouldn't hurt anything. Not so sure with some of those additives - some contain solvents that react with rubber or synthetic rubber pieces used in the fuel system possibly causing them to swell or degrade. Some people say the same thing about ethanol, but I don't have any evidence that ethanol causes any problems in any of the vehicles I've owned.
Arco gas, which has ethanol in it, is about 25 cents a gallon cheaper than the Top Tier Gasoline (Chevron, Shell, etc.) in this area. The Tappet Brothers recommend buying the cheap gas and putting in an additive every so often - if you like doing that sort of thing. Gasoline and ethanol are pretty good cleaners to begin with; so it's probably a waste of money. Ethanol might not make sense from a macro-economic or overall emissions standpoint but it burns just fine in my experience.
I think people who complain about bad gas or gas causing problems in vehicles have one of three things going on - (1) some other problem that's causing the engine to run poorly, electrical, air, compression or maybe something with the fuel system (not usually the fuel itself). (2) they actually did get a batch of bad gas, which in my experience is very rare, actually never in my particular case. (3) they let a vehicle sit for a long time and the internal parts of the fuel system start to corrode/degrade/stick. I'm talking long time here...not a couple of weeks or even over a winter.
The best thing you can do, if your concerned about this, is run the engine to operating temperature for 20 to 30 minutes once a week or so and keep the gas tank topped off to keep condensation/rust to a minimum. I've left gas in lawnmowers, edgers, pressure washers, my pickup truck for long periods of time without starting them with no ill effects. I've used Arco 87 octane regular gas with 10% ethanol in my 26 year old pickup for it's lifetime, and never had a problem with the fuel injection or other parts of the fuel system, so at least I have that data point. I use that same gas in the two Kawaski's as well and no problem with the carburetors so far. Ditto for the Harley using Arco premium.
___________________________________________
All three motorcycles are running great. I'm really glad we have weather that allows me to ride almost every day of the year.
I really like reading about, riding and tinkering with motorcycles.
Posted by Jack at 5:32 AM