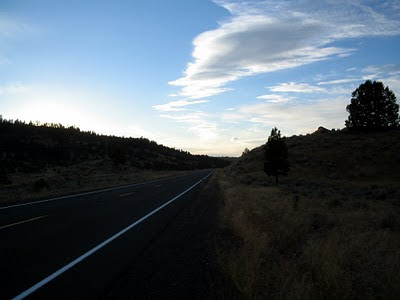 I rode something over 500 miles Friday and Saturday, and as I type this about 1:30 a.m. Sunday I'm thinking I'd like to get on a motorcycle tomorrow. No particular destination just the wind, the road and the sky.
Postscript - I took a winding trip up to Bellingham via Silvana, the Pioneer Highway, Bayview State Park and Chuckanut Drive on Sunday. There were a lot of other motorcyclists and bugs out.
Posted by Jack at 1:38 AM 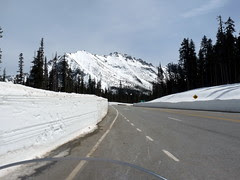 P1010301
Originally uploaded by Jack Crossen
I wanted to be in the line for when it opened but I just missed the gate opening by about 20 minutes because it took me longer to cover the 100 miles up to the gate than I anticipated. The road was in great condition - nice and clean with snow banks up to about 8 feet beside the road in places.
It was a glorious day and really nice to be on that beautiful road with almost no other traffic.
I road East on 20 to Winthrop, Twisp and then South on 153 to Pateros, Brewster and then North on 97 to Tonasket for the night. That route takes you over Rainy Pass (4855 feet) and Washington Pass (5477 feet). On Saturday I came home on 20 out of Omak over Loup Loup Pass (4020 feet) and continued on 20 over the Cascades. 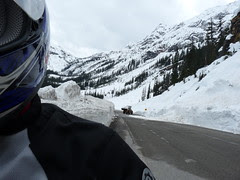 P1010308
Originally uploaded by Jack Crossen
It was raining off an on Saturday and felt much more winter-like up on top. There was a snow slide that closed the road for a short time. You can see the front end loader scooping up the snow behind me. The North Cascades highway is an up and down winding road - unlike going over Snoqualmie Pass on 90 or Stevens Pass on 2 where it's pretty much just a straight shot up and over. That makes it a lot more interesting. The last time I was on this highway it was packed with other cars and RV's. This time it was me and some bicycle riders, motorcyclists and some cars - no RV's yet.
Tonasket is about 20 miles from the Canadian border. If I had the right documents I would have looped back through Canada - next time after I get one of those enhanced driver's licenses.
Funny questions I was asked on this trip -
"Is that your motorcycle?"
"How fast have you driven that thing?"
Both by boys about 10-12 years old. One in Brewster and one in Marblemount.
I like the way riding puts you out in the open and people will strike up a conversation. A lot of times it's a story about a motorcycle someone used to have. 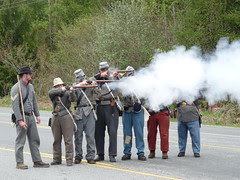 P1010318
Originally uploaded by Jack Crossen
On the ride though Marblemount I happened to run into a gunfight in the middle of the street. They had cannons and loud booming things - How lucky can you get?
I posted pictures of the Civil War Re-enactment
and the North Cascades Highway on Flickr.
It was nice to get out.
Looking forward to more summertime... 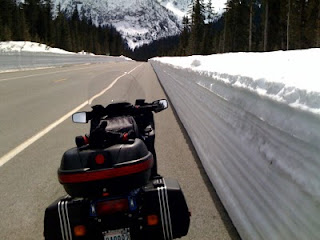 I went to see Sweetgrass last night at the Varsity Theater by the UW.

It's a movie about sheep ranchers, sheepherders and sheep. It's set somewhere near Big Timber, Montana and in the Absaroka-Beartooth Wilderness Area.

I really enjoyed the movie.
It made me think about my Grandfather Crossen working as a sheepherder after he came from Norway and later raising sheep in the Ingomar, Montana area.
I also liked seeing the scenes in the Beartooths - one of my favorite places. I fished for trout and walked through some of that wilderness area when I was younger and once on a two day trip I saw one other backpacker so it can be nice and remote. According to Wikipedia it's the largest area of unbroken land above 10,000 feet outside of Alaska.
There's a funny scene in the movie where the younger sheepherder is calling his Mom and complaining while the camera pans around showing absolutely stunning scenery. It does take a special type to be able to handle that lonely sheepherder life...unfortunately I guess that way of life is pretty much a thing of the past.
Posted by Jack at 5:45 AM

I Got To Road Test The Connie Today

I went to Tacoma for Easter dinner and the weather was nice enough to ride a motorcycle. I took the Edmonds/Kingston ferry over to the Olympic Peninsula and rode Highway 3 South and over the Tacoma Narrows Bridge. I took I-5 home so it ended up to be about a 150 mile trip.
It was really good to see everyone and have some tasty food.
I'm pleased with the way the Concours is running. The kneesaver lowered footpegs and highway pegs make riding more comfortable.
View Larger Map

I felt like Steve McQueen leaving the ferry today. The ferry worker directing traffic made the "rev-it" sign when it was time for me to get off. I got a little happy with the throttle and found out the ferry ramp makes a pretty sweet jump. Just a few inches of air but it was pretty fun and funny.
Posted by Jack at 5:56 PM