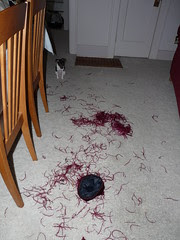 ...and all the feathers came out of this hat. At least that's his story.

Edgar was being pretty quiet - which usually isn't a good sign. I thought he was sleeping under the chaise near the heater vent. He came trotting into the room where I was working with a bunch of feathers in his mouth. So much for Auntie's old feathered hat...
Posted by Jack at 8:51 PM 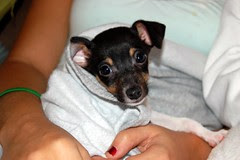 TFT - Edgar
Originally uploaded by Jack Crossen
We adopted a new Toy Fox Terrier puppy in December. His primary name is Edgar although he also goes by Eddie, Ed, Bitey, Pip or TFT. He's a great little dog, very smart, lovable and funny. He doesn't bark unless there's a reason, he's taken to house training quickly and will fetch a ball until you get tired of throwing it.

He's good around Billy although a bit of a pest since he loves to play keep away with the ball, take little nips and play fight a lot. Bill is good about not chomping on the little guy. I'm looking forward to having Ed get used to a collar and then a leash so we can go for walks when it gets warmer. He's perfectly happy to be inside and gets plenty of exercise running and jumping around the house so there's no big rush.

We've left Edgar home alone once and he did fine. He was confined to the kitchen and bathroom area since there isn't anything in those areas for him to accidently chew to pieces or electrical cords that could be dangerous if he bites on them. 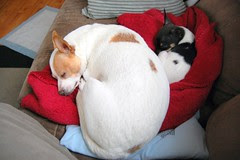 Edgar is about 10 weeks old in this picture of Bill and him sleeping. Bill isn't a big dog but he looks a lot bigger besides Edgar. Edgar is about 4 months old now and will be about 10 inches and 7 pounds when he grows up.

Saying a dog is a great dog or a good dog or a smart dog is a relative term.

For someone who's never had a dog, Edgar might seem like a bad dog sometimes. For example today he -

Ripped a hole in one of our good sheets
Unwrapped two bars of soap and licked them for awhile
Picked up a piece of dried cat poop in his mouth while he was outside
Came back inside and threw up on the carpet
Pooped on a blanket that we'd left for him to lay on
Picked up a leaf from the Ficus tree and ran away with it in his mouth after I tried to get him to drop it
Drank some dirty water out of the Ficus tree pot even though he has clean water in abundance.

He wasn't home alone, and he isn't a bad dog at all - he was just acting like a pup.

To me he's a great dog. He's really funny and is training us well.
Posted by Jack at 5:50 AM

On January 13th 1982 Air Florida Flight 90 crashed shortly after takeoff from Washington DC's National Airport when the airplane's tail section contacted the 14th Street Bridge and the airplane broke apart as it entered the partially frozen Potomac River. The weather in Washington DC that day was severe - temperature in the mid 20's F and heavy snow. Many offices and businesses had shut down early and the roads were jammed with traffic.

The Wikipedia entry for Air Florida Flight 90 provides details of the events that day and this NTSB abstract gives a short summary of the accident.

The story of Air Florida Flight 90 taught us valuable lessons about de-icing airplanes, and Crew Resource Management (CRM) but on this anniversary I'd like to recall another valuable lesson about the human spirit.

Six passengers survived the initial crash by clinging to pieces of wreckage floating in the river. With water temperatures of 33 F hypothermia sets in quickly and time to exhaustion or unconsciousness can be as short as 15 minutes and survival time as short as 30 minutes. One of those passengers did not make it to safety because he gave the rescue helicopter lifeline to other survivors rather than taking it for himself.

The day after the crash the Washington Post described this passenger -

"He was about 50 years old, one of half a dozen survivors clinging to twisted wreckage bobbing in the icy Potomac when the first helicopter arrived. To the copter's two-man Park Police crew he seemed the most alert. Life vests were dropped, then a flotation ball. The man passed them to the others. On two occasions, the crew recalled last night, he handed away a life line from the hovering machine that could have dragged him to safety. The helicopter crew – who rescued five people, the only persons who survived from the jetliner – lifted a woman to the riverbank, then dragged three more persons across the ice to safety. Then the life line saved a woman who was trying to swim away from the sinking wreckage, and the helicopter pilot, Donald W. Usher, returned to the scene, but the man was gone,"

Arland D. Williams, a 46 year old bank examiner, was the surviving passenger who drowned after giving the helicopter lifeline to other passengers.

"His heroism was not rash. Aware that his own strength was fading, he deliberately handed hope to someone else, and he did so repeatedly. On that cold and tragic day, Arland D. Williams Jr. exemplified one of the best attributes of human nature, specifically that some people are capable of doing "anything" for total strangers."

Arland D. Williams was posthumously awarded the U.S. Coast Guard Gold Lifesaving Medal, Washington's 14th street bridge was renamed in his honor, and an elementary school is named after him in his hometown - Mattoon, Illinois.

The following people also received awards for bravery as a result of their acts on that day:

There were multiple acts of heroism on that day 27 years ago - Arland D Williams gave his life to save others. Roger Olian and Lenny Skutnik both entered the freezing river to help the surviving passengers. The Park Service helicopter pilot Donald Usher and Melvin Windsor put themselves into danger using a makeshift lifeline under extreme weather conditions to save the passengers in the water.
Posted by Jack at 12:54 AM

Time - Our Most Precious Resource

In an article in the New Yorker Roger Rosenblatt writes about the death of his young daughter and how her family is dealing with the loss of a mother, wife and daughter. I was particularly taken with this piece of the article where he writes about the novel Deaf Sentence

by David Lodge. The book is about a retired linguistics professor...

"Desmond Bates who is losing his hearing and who is also deaf to life until, against his will, he visits Auschwitz, where the silence teaches him to hear. He reads a letter from a prisoner in the camp to his wife, discovered in a pile of human ashes. One sentence rises up to Desmond: "If there have been at various times, trifling misunderstandings in our life, now I see how one was unable to value the passing of time."

"As far as I can tell, this is how to live - to value the passing time."

Generally we are taught that time is valuable from an efficiency standpoint - we need to find ways to get more organized so we can get more done. Before we climb that ladder we should make sure it's leaning against the right wall. One way might be to reflect on the passage from Psalm 90:

"So teach us to count our days that we may gain a wise heart."
Posted by Jack at 5:31 AM