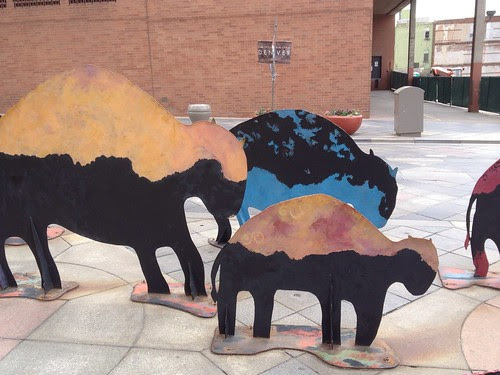 Denver, a photo by Jack Crossen on Flickr.
Spending the week in Denver. Nice to see the sun and lots of fun things to do here.

I've really enjoyed having access to the Denver BCcyles. You can buy a 7 day pass for twenty dollars and get unlimited use of bicycles parked at special computerized racks around the city. I haven't had to use motorized transportation all week.

RTD bus line AF takes you to and from downtown and the airport for 11 dollars. Make sure you have the exact change before you get on the bus.

I went to a Reggae concert at the Bluebird Theater last night. The Long Mile, Expanders and The Green played. It was a thumpin good time.

I checked out the Denver Art Museum. There's are textile exhibits currently, plus a lot of cool Western art. You could easily spend a full day or more there. The architecture of the buildings is impressive.

I went to an exhibit of Michelangelo's art at the Denver Pavillions on the 16th Pedestrian Street Mall. The tour guide was excellent.

I went to a Rockies/Dodgers game tonight at Coors Field. It was a nice evening and that's a nice ballpark. There were a whole bunch of peewee/little league players there to walk the outfield before the game. It was 5-2 Dodgers when I left but I see the Rockies tied it up in the 9th to make it an extra inning game.

I have had some pretty good vegen food here at the Watercourse, City O' City, and the Pho-natic. There's also a few Noodles and Company fast food restaurants around the city where you can get vegen noodles.

The Warwick Hotel where I'm staying is conveniently located 2 blocks from the state capitol. It's also the only hotel in Denver with a rooftop pool - which I've been enjoying. Nothing like the sun in the mile high city after coming from the land of clouds and drizzle :-).

I visited the State Capitol early one morning and basically it was me and a few state employees. The legislature isn't in session so things are pretty quiet. It's an interesting building to poke around in.

I've been to Denver before but never had a chance to stay in the city for any length of time. It was worth the trip. It's a good city to walk/bike around in and the weather has been great - sunny and 70's. Round trip airfare on Frontier from Seattle to Denver is currently about $218. I picked this trip by looking at a map of the U.S. and finding places where it was expected to be sunny and warm...turned out very nice. 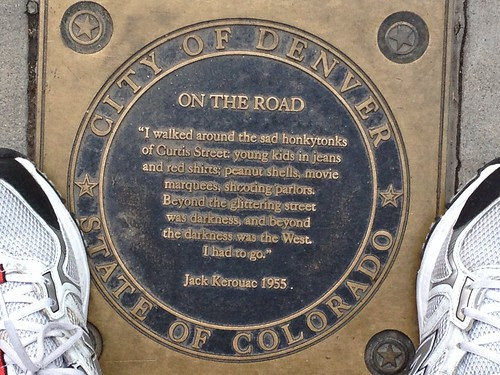 Denver, a photo by Jack Crossen on Flickr.
I forgot Jack Kerouac had been in Denver.