Wobbling Into Omak - Blowing Into Waterville

On Wednesday, as I was approaching the Canadian border going south the front end of the Connie started to feel a little weird - a twitch or something when I was turning. I couldn't detect anything obviously wrong so I kept pushing on south on 97. I wanted to at least get into the U.S. before the bike gave in, if that was going to happen.

Riding straight was okay but in turns the front end was starting to pulse/wobble/twitch a little bit more as I continued on. I pulled into a big parking lot in Omak and did some circling turns at low speed to see how bad it was. It was bad enough I decided to throw in the towel, stay in Omak and try to figure out a way to get some wheel bearings for a Kawasaki Concours C10 and some way to get the old ones out and the new ones in. 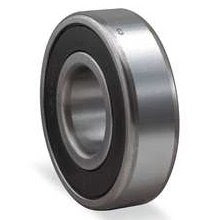 The NAPA bearing has metal shields on each side. They come from the factory with some grease on the balls/race but you can't pack any additional grease into them - 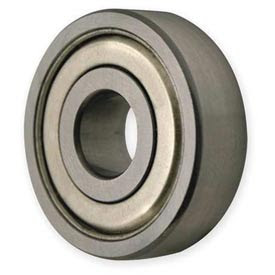 I asked the guy at NAPA if he had any suggestions for someone who could drive the old bearings out and drive the new one's in? He suggested the Omak Marine down by the river. Went there and they were busy but the owner got on the phone and called around and found someone a block away who said he could do it but it would be about 20 minutes before he could start!

The exclamation point is because I feel super lucky to have this problem in this place. It could have just as well have happened in Northern B.C. on the road, out in the boonies, in the rain.

The place I got the new bearings installed is called Go Moto. It's right across the street from the swimming pool in Omak. I was in a little before noon, had some rice and beans at the Mexican Coach-Cafeteria beside the place, hit the adult swim at the Omak pool from noon until 1 pm...walked around downtown Omak and was back on the road about 2:30 pm. The owner/technician of Go Moto is Dennis Ayika who graduated from Everett High School (small world). He knows a lot about a lot of different kinds of motorcycles and provided great service at a reasonable rate. If you own a hard to work on bike like a Ducati it might pay to take a trip over to Omak to get some work done at his place. 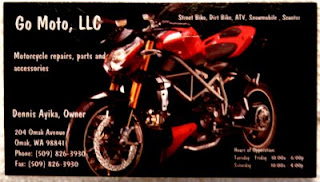 The old bearings had started to rust a bit and were getting a little notchy. I knew the bearings were starting to fail because when I put the bike on the center stand the front wheel wasn't spinning as freely as it normally does, and I was getting the little twitch/wobble when the bearings hit the worn spot. Dennis thought the NAPA bearings would last the life of the bike, but I have some NTN bearings on order from Murph's just to have a spare set available. Based on my experience I'd guess replacing the bearings at 30,000 mile intervals would be prudent - since this set failed at about 39,000 miles. You really don't know how long they'll last - but you can probably extend the life by not pressure washing around the bearings and putting some new grease to keep out water when you have the front wheel off.
____________________________________

Riding along the Columbia, and up unto the plateau to Waterville the winds a whippin pretty good - but it's supposed to calm down for tomorrow and Saturday in time for Waterville Days. 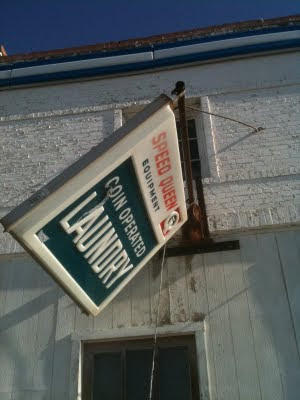 I'm spending the last night of my mini-odyssey in the historic Waterville Hotel. What a great place. All kinds of cool old stuff, radios, pictures, books, etc. etc. 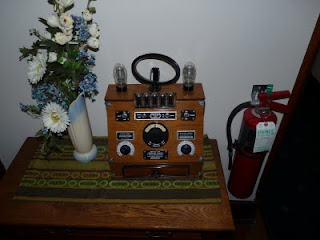 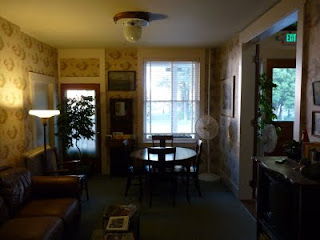 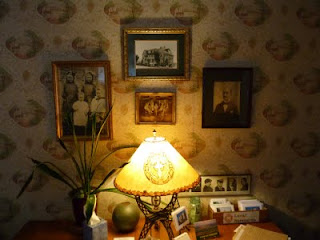 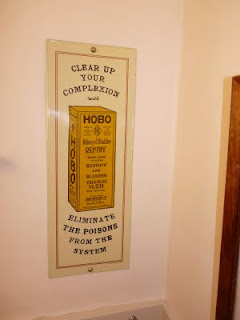 Great meal and atmosphere at the Harvest House Art Gallery and Supper Club in "who would of guessed...Waterville." For dinner tonight it was me, the owner (who is also the head of the Chamber of Commerce, bread baker, chocolate maker, old time camera photographer, owner of local industry Bainbridge Manufacturing, Inc. and one of the main organizers of the upcoming Waterville Days celebration this Friday and Saturday), a visitor/friend of the owner from California, and the Chef Valerie.
Valerie had made some wild strawberry jam that she wanted to taste like her Grandmother's. It was great with the fresh baked bread. The salad greens came from the garden out back - pesticide free, and she was kind enough to make a vegan entree for me on short notice that was great - very fresh, seasonal, local food. They even gave me some strawberry jam and the fresh baked bread to take back to the hotel for a midnight snack.

I'd drive from Seattle to Waterville just to stay at the Hotel and eat at the Harvest House. It's all quite unique. I like the whole small town vibe where people are friendly (or maybe not..but usually), everybody knows everybody else and they aren't too wrapped up in the pressure of traffic/noise/crime to take some time to slow down. Not that small towns are Shangri-La, but I always feel a little bit like I'm at home in any small town. I really like the unique flavor of the local shops, people, scenery. I think that's what I like about big cities like Seattle, New York City, San Francisco and Austin Texas too - there's different neighborhoods, small communities within a larger city and not just a big unplanned urban sprawl with no real town or community at all.

Really glad I made this trip and looking forward to the next one - it will be good to get home tomorrow and see B, R&B and Edgar the TFT.