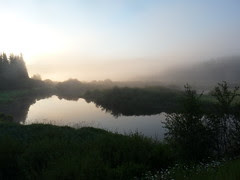 The Yaak River valley in Northwestern Montana is (was) a nice remote area with some good fishing opportunities and a quirky bar called the Dirty Shame.
I've been there fishing and camping before and drove through with the family a couple of times. One time we were the only people in the bar except two guys dressed in homemade buckskin clothes. They were picking huckleberries and had a goat in the back of an old pickup with saddlebags on it to use for carrying hucks. They were squatters.
The Yaak valley was an area where people escaped to in the 60's and there were some number of hippie type squatters who put up tents/shacks on the forest service land, or private land that was owned by absentee landlords and rarely visited, around there.
This time when I was through things were quite a bit different. It was a Saturday and there were quite a few motorcycles on the secondary road into the town of Yaak. There were lots of motorcycles in town, plus hikers, campers and tourists in cars. The lady who owns the bar now showed me a national motorcycle magazine that had rated the ride to Yaak as a desirable motorcycle trip.

Too bad. It was better before it was discovered.
It's still pretty.
Posted by Jack at 2:42 AM