Central Park From The Top of the Rock 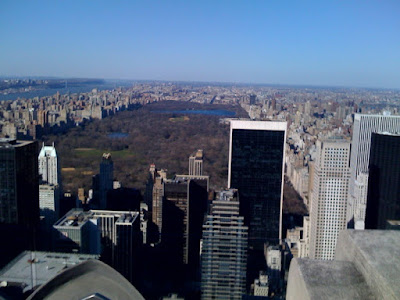 It was nice on top of the rock today. Windy at street level but surprisingly calm up on top. One thing I was surprised to see was that the ice skating rink at Rockefeller Center is still open. 30 Rock was my last stop after taking the OnBoard New York City Bus Tour. I've never taken a guided bus tour before but B recommended I try it for NYC since there's so much to see and do here. The tour guide Robert and the driver Mel were great - very friendly and knowledgeable. I'd read the reviews of OnBoard and people seemed pleased.

Our first stop on the tour was across from the Dakota Hotel at Central Park beside the Strawberry Fields. I learned that Yoko Ono still lives at the top floor of the Dakota and got a nice picture of the "Imagine" mosaic in Strawberry Fields. We went through the park, passing by the Sheep Meadow and Central Park Zoo and then South from there past Madison Square Park and to the Southport Ferry Landing where we caught the ferry to Staten Island. Got some good pictures of the Statue of Liberty. Robert is a native New Yorker and had lots of stories about the city and growing up here. One funny one was that when he was little and his parents would visit the park and pass by or visit, FAO Schwarz, his parents would tell him it was a Toy Museum (nothing for sale there...just for looking).

We stopped at the WTC site and Robert gave a very respectful and heartfelt talk. I appreciated the fact that he said we should remember the many heroic acts of that day. When we left a little boy was riding a tiny bike with training wheels, as fast as he could, down the mostly deserted sidewalk, with his dad not to far behind. Looking towards the future..

On my way back home I went to Grand Central Terminal to catch the subway right at rush hour. It was pretty cool seeing what it was like for all the people who work uptown to leave the city.

A week isn't going to be long enough. I'd like to come back here to get to see more.

One important thing I learned from Robert is that Houston Street is pronounced House-ton not like the city in Texas.