Yesterday was a long day.

I was trying to get out of Prince Rupert as early as possible, but the Canadian Customs decided they wanted to keep me hanging around while they searched my bags and asked me the usual silly questions. When I told the guy I'd toured the state capital building in Alaska - he said Anchorage? I'm glad I don't have that job. It's a toss up when I cross the border of either basically a wave and a smile or the 3rd degree and searching my luggage. At least I wasn't strip searched. I didn't get out of Prince Rupert until almost 2 pm and I had an 8 hour drive ahead.

It was raining in Prince Rupert and rained until I got a couple of hours east on Highway 16 the Yellowhead Highway. It's a beautiful drive along the Skeena River, but it was foggy and raining so I didn't get the full effect.

It got pretty cold coming into Prince George but I was okay with my gear on.

If I was planning this trip over I'd spend a night in Smithers about halfway between Prince Rupert and Prince George. Since I had to press on to Prince George I only had time to snap this photo at a gas stop - 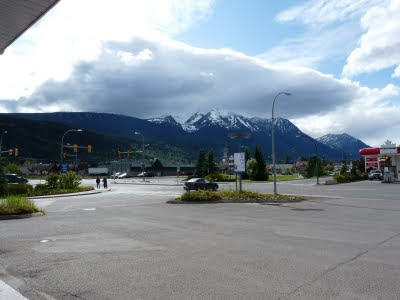 I managed to pick up some kind of cold bug on the ferry so it's going to be nice to soak in those hot springs at Miette later today.