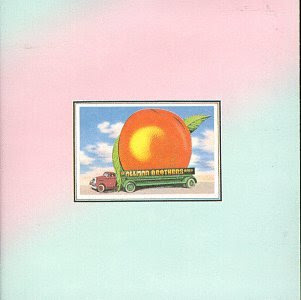 I like the Eat a Peach album cover because it's simple, playful and the pastel colors appeal to me - plus I like the music, but the cover didn't even make it into the top 25 in Rolling Stones best covers. A couple of others I like did though - The White Album was appropriately named number 9 and Pink Floyd The Dark Side of the Moon was 22

B and I went to see the Allman Brother's Band in Minneapolis around the time Eat a Peach was released. A friend got us tickets - which turned out to be on the very top row of the stadium way far away from the stage. But we had a great time - the music was really good and the people around us shared all sorts of treats.