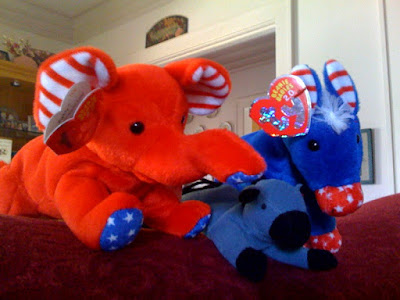 I like to play fight with them occasionally but nothing too serious.

Bill on the other hand would like to bite off their heads and tear them to shreds if we let him. He seems to have a preference for the Democrats - since he likes to bite the elephant and run around with it in his mouth. Like any poll, the "which toy does Bill bite poll" may not be accurate.

B was a young Republican for Richard Nixon and I was a young Democrat for George McGovern when we met. We've had over 25 years of happy marriage even though our political party affiliations differ. I'd say B tends toward the apolitical when it comes to ideology and politics in general. We tend to be very similar in our beliefs when it comes to important issues like family, education, work, faith and ethics. I'm not so sure that isn't the same for lots of people who have to be labeled as either Republicans or Democrats.

I'd say that we were born into our political affiliations. My family being Democrats and B's Republicans. My grandmother who lived through the great depression and raised two daughters as a single mother - was a strong supporter of FDR and subsequently a vocal Democratic party supporter. I grew up listening to people praise Democrats and criticize Republicans. For B it was the opposite. When she was very young she wondered who those Damncats were that people around her were criticizing and only later understood it was Democrats rather than Damncats.

Things are different in this presidential election - Barack Obama got all of our votes - even the unofficial Bill vote.