How Would Jesus Be Covered by Fox News?

The Pod Save America Podcast devoted part of their show this week to Fox News and it's corrosive effect on democracy. The New Yorker also has a story about corruption at Fox News, and within this administration (surprise), written by Jane Mayer. Finally...I was reading an article with the headline - It's time - high time - to take Fox News's destructive role in America Seriously in the Washington Post this morning.

That got me thinking about how Jesus Christ would be covered on Fox News if he were alive today.

Fox News and the interconnected web of right wing media wrap their product in "patriotism" and "Christianity". In fact what they are selling is neither patriotic (doing what is best for your country out of love for the good things your country stands for) or Christian (if we consider Jesus Christ the spokesperson for that religion).

Fox News talking heads are millionaires paid by billionaires to sow hate and half truths designed to frighten and divide working and middle class Americans into supporting politicians and policies that favor the gilded class. Fox is certainly not alone in this endeavor as there is a well financed web of right wing media that operates symbiotically to further a goal of consolidating wealth and power in the hands of a very few elites. Part of keeping this wealth and power involves redefining, or ignoring what Jesus taught, in order to justify; war and therefore the need for a military industrial complex, capital punishment, discrimination against people of different color, ethnicity, national origin, sex or sexual orientation, glorification of consumerism and ultimately trading the future of the planet for the immediacy of profit.

As a long time consumer of media (right, left, center) I can say nothing - even on the farthest reaches of the left, has encouraged me to hate individuals because they subscribe to some precepts of conservative, libertarian or Republican thinking. There are elements of conservative, libertarian or Republican orthodoxy that a thinking person would find valuable in forming a world view.

The majority of popular media on the right however marinates true believers in a toxic stew of hate, fear and half-truths, to the point where family members turn against family members, friends against friends, fathers against sons, mothers against daughters.

It's all idiotic, ugly, fake and low-brow but I suppose entertaining - and certainly has been effective in allowing the ruling class to maintain power and consolidate wealth and privilege for themselves while turning a blind eye to the 40% of Americans who can't come up with 400 dollars to deal with an emergency expense and the 90% of Americans who see the American Dream fading from sight as they struggle to pay for housing, food, medical care, education, child care...let alone saving anything for retirement.

Fox News and the interconnected web of right wing media have done tremendous damage to the fabric of American society.

Marilynne Robinson writes a heartbreaking recollection of how her mother, by watching Fox News, grew to hate her daughter - Marilynne.

The following quote is from Marilynne Robinson's book "What Are We Doing Here?"


"Toward the end of her life, my mother began to be tormented by anxieties and regrets. I, her daughter, a self-professed liberal, was one of those who had ruined America. I would go to hell for it too, a fact she considered both regrettable and just...A mother less Fox-saturated might have taken satisfaction from degrees and prizes, but to her they were proof that I was in league with the sinister Other....My mother lived out the end of her fortunate life in a state of bitterness and panic, never having had the slightest brush with any experience that would confirm her in these emotions, except of course Fox News."


If any of the people associated with Fox News actually believed in the teachings of Jesus that network would not exist. Of course they don't so it does. Jesus would be labeled a radical, socialist, communist anti-capitalist, bleeding heart liberal and crucified by Fox News, Breitbart etal. if he was alive today.

When talking about Fox News, something to keep in mind is that Sean Hannity has the most popular show on that channel which draws in about 3 million American viewers, while 138 million Americans voted in the 2016 elections. Not to say Fox doesn't have a big voice with some segment of the population and that Fox is only one cog in a huge interconnected web of right wing propaganda.

Ignoring or redefining the teachings of Jesus is not simply something practiced by the right wing media. NBC, CBS, ABC, CNN, MSNBC and popular culture in general have abandoned, or redefined, the radical teaching of Jesus. Living in a society where consumption of goods and accumulation of wealth is considered the ultimate good  is not compatible with what Jesus taught.

I'm certain there are many religious experts who would disagree and point to various Biblical passages to prove that it's okay to kill humans, hate gay and trans people, hate someone with different political or religious beliefs, discriminate against women, or destroy our children's planet. Being a simple person I prefer simple examples of what Jesus taught according the the Gospels.

I believe Jesus had some radical things to teach and  only hope that the misguided souls who accept the cartoon simplicity of Ayn Rand's teaching someday grow up and realize that fate has not treated all human beings as kindly as the Randian adolescents. Adolescents like Donald Trump, Paul Ryan, Andy Puzder and many more. Ayn Rand popularized the idea of makers vs. takers and the virtues of selfishness. Having grown up in a household where my widowed mother received social security survivor benefits and a VA pension to help feed, cloth and house four children, I find the maker/taker argument misguided as well as insulting. I also benefited from the G.I. Bill after serving in the Navy which I suppose makes me more of a taker to the Randian man/children.

Ayn Rand was also an avowed atheist, not that I'd hold that against her - but somewhat surprising when so many avowed Christian's consider her their lodestar.


There comes a time in everyone's life to put away the comic books and grow up. 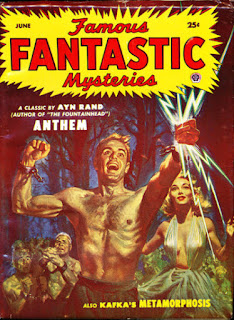