I had a blast riding to San Francisco and back last week. California Highway 36 was everything I'd hoped for as far as being possibly the best motorcycle road in America. It's like riding a roller coaster.

It was a long day riding from Mt. Shasta, west on 36 and then south on highway 1 to Gualala. The distance wasn't that far but 140 miles of curvy, twisty, up and down road on 36 and then another 100 of similar road on 1 was an exercise in concentration and endurance for me.

I had a great time in San Francisco visiting Becca and Alex. It was really nice to see them and their new place in Outer Sunset. We cooked some good food at home and ate at Gracias Madre which has some tasty vegan food. I stopped at Judahlicious a couple of times for a snack while Alex and Becca were working. I enjoyed meeting the Comcast installer, getting the kids bikes ready, washing a window, getting some plants and putting together their new BBQ - and then eating some delicious food.

I left for home early Saturday morning so I could avoid the heat in the Central Valley. It had been over 100 degrees all week - 115 degrees one day in Redding. Saturday's high was predicted to be 100.

I was pretty much in the groove riding and got into Redding about 10 am. I figured I'd ride until I didn't feel like it anymore. I ended up making a 1 shot trip from San Francisco to Everett. I got home about 7:30 pm and felt pretty good. A Red Bull and Odwalla bar at each gas stop seemed to work well.

This isn't my picture, it came from Adventure Riders, it's the sign on Highway 36 west of Red Bluff. The road is nice and flat here but that doesn't last very long. Lots of blind hairpins and roller coasters coming up. The road narrows down to a 1 1/2 lane road with no center line for several miles at one point, luckily there wasn't a lot of traffic on this Saturday. Near the end of the ride I entered a long stretch of old growth redwoods - beautiful! 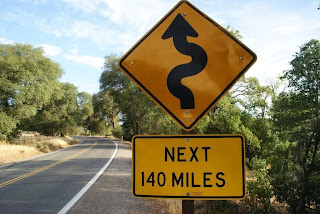