Kawsaki and Harley - A Few Observations

A few observations on the 4 cylinder Kawasaki vs. the Harley V-Twin - (a) it's a lot easier to change the oil and filter on the Harley. The Harley has a spin on oil filter and a drain plug held in place with a hose clamp, so you if you have a screwdriver and fairly strong grip to spin the filter you can change the oil and filter. The Kawasaki on the other hand has a complicated filter assembly that won't clear one of the exhaust pipe clamps, so you get to free that rusted nut before dropping the filter out. Make sure you get the two o-rings, spring, washer, and top cap back in correctly when you reassemble (see pic below for the parts that make up the oil filter assembly) (b) hydraulic lifters make the Harley worry free when it comes to valve adjustment. The Kaw on the other hand is supposed to have the valves checked, and adjusted using shims if necessary, every 3000 miles. This involves removing - the gas tank, 20 bolts from the valve covers and some other stuff (I haven't tried it yet...). and (c) The Harley has a belt drive. No messy chain lubing like on the Kawaski. 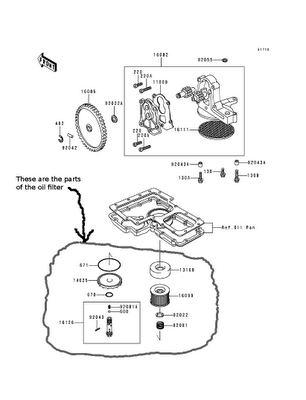