I finished the valve adjustment on my 2000 P-19 KZ1000P motorcycle last weekend.

This engine has shim over bucket valve arrangement (as opposed to shim under bucket, hydraulic valve lifters, screw type adjusters). There are two camshafts and 8 valves (2 per cylinder).

The valves are held closed by springs. As the camshafts rotate, their lobes press on the shim/bucket which opens the valves to allow the air/fuel mixture to enter on the intake stroke and exhaust to leave on the exhaust stroke.

As the valve wears into the seat the clearance between the camshaft and the valve stem decreases. With zero clearance the valves will not close all the way during the compression and ignition stroke. This will cause poor performance, loss of compression, decreased fuel economy and eventually burn the valve and or valve seat.

Measure the clearance between each shim and camshaft.

If the clearance is not .05 to 15 mm, remove the shim using the instructions for the Motion Pro valve shim tool and note the thickness. This is where you may need the caliper since the shims may not have the thickness marked on them.

Determining the new shim thickness is pretty simple. Assume there is no clearance (for example) and the existing shim is 2.50 mm. To get to the .15 mm clearance you need a shim that's .15 mm thinner - so you need a 2.35 mm shim.

You can probably swap some shims around so you won't have to buy all new shims.

Most of the valves on this bike were .04 mm or less. The thinnest feeler gage is .04 mm, which is really thin so you have to do some rounding. Assume the clearance is somewhere between .01 and .03, if you get a shim that's .1 mm thinner you're good because your clearance will between .11 to .13 mm. Once you figure out what shims you need, order them from Z1 Enterprises or your favorite source (Z1 has good prices). 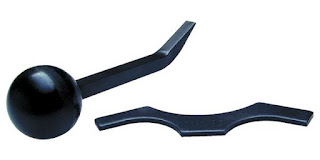 With the cam lobe point away from the shim you use the little bent-screwdriver looking thing to push the bucket down on the spring, then insert that other piece on the edge of the bucket to hold it down. Pull out the bent-screwdriver and the shim is free. Rotate the bucket so the groove is visible before depressing it so you can get a small screwdriver/pick under the shim to break it free from the oil suction holding it in place. Once the shim is free use the magnetic pickup tool to fish it out. It takes a fair amount of force to push the bent-screwdriver thing in-between the cam and the shim. If a shim seems stuck make sure the tool isn't on top of it and use a steady force to break the oil suction holding it in place - it can take awhile for that to happen. Just be patient and don't try to force anything.

This was an interesting maintenance task and fairly involved. I ended up cutting a gasket for the pulsing cover using some Felpro gasket material from Autozone. It was a pretty simple gasket - I wouldn't try doing that on anything with too complex of a shape or too many holes...unless I was totally stuck.

All in all pretty enjoyable and educational.