I've been looking around for a workbench to replace the plastic topped portable table that I've been using in the garage. The workbenches available from Sears, Home Depot, Lowes and Harbor Freight are either expensive or flimsy and sometimes both.

I found an ad on Craigslist for a workbench and vise that I ended up buying for 100 dollars. It's a 6 foot Shure workbench manufactured in Missouri and a Wilton Columbian D45-M4 vise which is made in the USA as well. The table and the vise are both heavy duty and had been well used in an auto-body shop for years before being sold at auction. They were both covered in overspray from painting and the table had a lot of bondo drips on it. 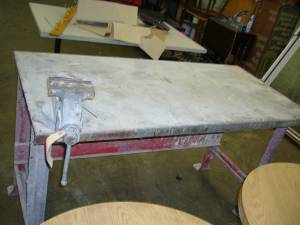 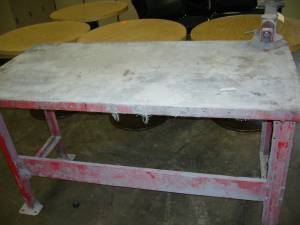 I'm assuming a lot of people would look at the pictures on Craigslist and move on because the table and the vise looked pretty rough. I kind of thought they looked like diamonds in the rough. That Shure workbench is a few hundred bucks and prices can be crazy for a Wilton Columbian vise made in the USA.

After an afternoon of wire brushing and sanding, then another day of priming and painting, the table looks like this. That's a piece of left over vinyl flooring, I had laying around, on top of the bench to protect the metal top and keep tools from banging when I throw them on the bench. 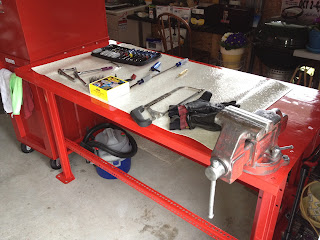 I didn't paint the vise because I like the patina so I'm just wiping it with a little oil to keep the rust off. Both pieces had zero rust when I got them since they were kept in a heated shop and covered with coats of over spray. 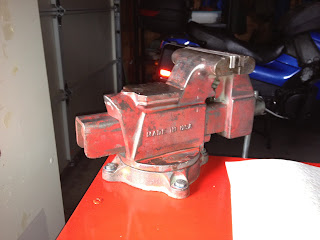 The only problem with the vise is that one of the jaw inserts was missing. Those things are expensive if you can find them (hundred(s) of dollars) so I made one out of some aluminum bar. When I get around to it I'm going to get a piece of 3/8 by 3/4 aluminum and make some that look more store-bought. The one I made is three pieces of 1/8 inch aluminum stacked together. It works fine - but I'd like to have two aluminum jaw inserts. I have some 1/4 inch fillister head machine screws (smaller head than normal machine screws) that I got from McMaster Carr that will work for attaching the jaw inserts. For my first try and ground the heads down on some regular machine screws because my largest drill bit is 1/2 and the head diameter is slightly larger than 1/2 inch.

I bought this Craftsman tool box a couple of months ago. I couldn't find anything on Craigslist that seemed like a good deal so I went for the new one. It works fine but I liked having my tools laid out on top of the table...now I'm opening drawers looking for stuff. But it looks cool. 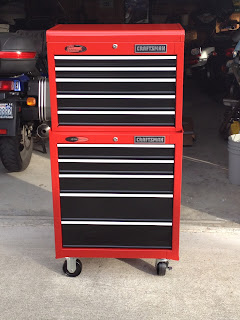 It's sort of funny to me that I've never cared to have a fancy tool box but have spent a fair amount of time in my life as an avid do-it-yourselfer using whatever tools/toolbox I happened to have and only buying tools when I need them. The shiny Craftsman tool chest replaces this tool carrying device I bought 40 plus years ago from J.C. Whitney. 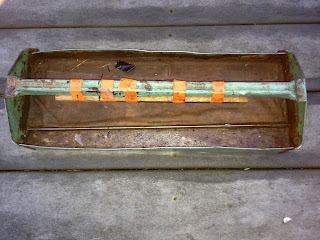 The rural part of Montana I grew up in didn't have much in the way of stores so I ordered a toolbox and some tools from J.C. Whitney to work on my bicycle, pickup, car, motorcycle, or whatever. It served me well and I sort of hate to get rid of it. I think that orange tape and the wood I used to reinforce the handle is from the 70's. You can click on the picture to enlarge it to see how beat up that thing is.