It started to snow in Everett on Saturday January 14th. I was at the gym when it started and within a half hour or so there was a few inches on the ground. It was fun practicing my winter driving skills in the empty parking lots. There were some cars getting stuck, a few pulling off to the side of the road and one motorcyclist who had done a low-speed get off.

I took this picture on Tuesday looking off the front porch. 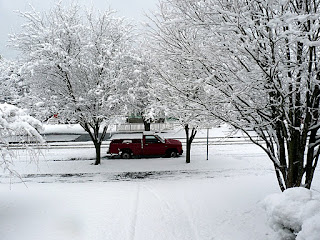 The two pictures below are after driving to the airport on Thursday January 19th in an ice storm. I'm holding the windshield wiper up to show the ice that was stuck to the blade. That ice made it hard to keep the window clean as the sleet/snow/ice fell. Combine that with a combination of drivers driving too slow for conditions, too fast for conditions and it was interesting to be on the freeway. I made good time though - most people were staying off the roads. 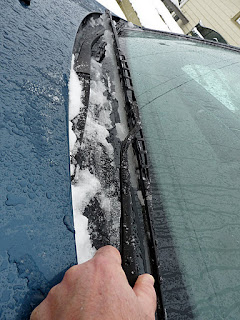 The snow, sleet and ice mixture was sticking to the underside of the fenders. No problems with traction but that low-riding Hyundai was getting close to high centering coming up the driveway since there's a natural hump in the middle of the drive. 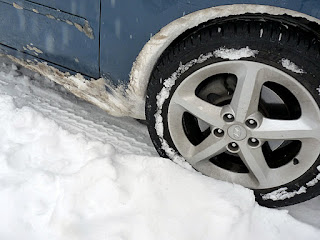 This picture was also taken on Thursday January 19th. By this time we had 7 inches of snow on the picnic table. 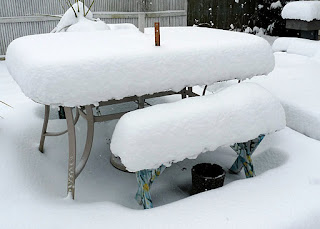 I didn't get all the way to the airport since they cancelled B's flight (the third cancelled flight for her that day). Becca finally got her a flight at 8:30 pm and gave her a ride to the airport so everything worked out okay.

I enjoy the snow here with the exception that it's no fun to get stuck in traffic so I'm careful about where I drive when it starts snowing. Driving can be a challenge since this is a fairly hilly area, conditions can very widely within short distances, traffic can be heavy, people tend to not know how to drive on snow/ice and the snow tends to be heavy/slippery - no powder snow here that blows off the roads.

As I write this they are predicting temps into the high 40's or maybe 50 later this week with some sun and no precipitation for the first week of February.