Hanging Out At Qualicum Beach

I rode from Sidney to Port Renfrew on the West coast of Vancouver Island. It's amazing how different some roads are when you are driving on them vs. looking at them on a map. I planned to make a loop going west on the southerly route and back east on a more northerly route. The route looked like main roads on the map. Not exactly.

Going west to Port Renfrew the road is pretty good - lots of one lane bridges as you get further west, and a fair number of frost heaves - or whatever makes the road sink/rise in that area.

There is logging in the general vicinity but on Saturday no trucks. There is gravel on some of the turns which can be interesting. It's not intended to be a gravel road but logging trucks rear wheels pull gravel off the shoulder onto the road.

The road east out of Port Renfrew was pretty much deserted - except for a guy who lost a boat off a trailer. There are signs that have what looks like a sawtooth on them - indicating the road is bumpy.

There's no centerline, no road markers and lots of one lane bridges. You can't get going too fast, especially in the corners because the gravel or bumps will throw you off line. Add in some rain and a little fog and it's a slow go.

I was wondering why the kid at the museum in Sooke told me that trip would take so long. It's because you spend a lot of time at 35 mph and below. It's a nice ride - not great and I wouldn't recommend it as a good motorcycle road. It's a road you take to get to the fishing spots, beaches, parks, surfing areas, the hotel in Port Renfrew - or if you want to get away from the traffic around Victoria and the East coast of the island.

Port Renfrew is pretty, people are nice and the hotel there is clean. Sooke has a really cool museum/visitor center with old machinery and other esoteric odds and ends. Super nice people working there. There were a couple of young backpackers hanging out in the yard from South America. One of them was playing the harmonica tunelessly - I can't understand Spanish but I think his buddy was telling him to learn to play. Looked like they were on an adventure.

I was north of Port Renfrew on a fishing trip out of Ucluelet years ago. We flew in for that. With typical fisherman optimism we planned to catch our limits and bring home some whoppers. It was the wrong week for fishing. I still remember our puny little packages of fish coming off the baggage ramp. It was fun - we caught enough rockfish to make some good fish and chips plus we got to ride in a pickup, ferry, bus and small plane.

Unfortunately any pictures I took with my camera will have to wait until I get home - unless I buy a USB cable. Forgot that darn thing. I ended up getting a memory card reader at London Drug, which does the job.

Bikes running great and I have a comfortable place to rest for the night. Plenty of time to nose around on my way to Port Hardy tomorrow. 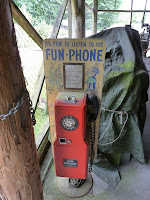 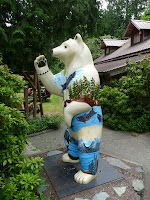