It was drizzly and grey Saturday morning in Everett. Nice and sunny over on Whidbey Island though. I started out going south but the weather in the convergence zone was getting worse so I looked around for where it looked less cloudy. Looked better up North. I took the Mukilteo Ferry to Clinton. The fare for a motorcycle and rider is $3.80 which you can't beat. I was the first motor vehicle on and off. Also the only motorcycle which is unusual.

A Sheriff's Deputy pulls in behind me. I'm thinking I'm going to get a lecture about something - or a ticket or who knows? He asked me if everything was okay and just wondered if I needed any help. He smiled and patted my shoulder.

Part of the reason for my trip was to scout routes into Anacortes. I found a really nice spot while doing that called Rosario Beach Marine Laboratory. There's a nice beach for looking at sea things, with picnic tables, group shelter and a lady with a bunch of samples of things you can see in the tidepools and on the beach. There were a few divers there - but very uncrowded considering it was Saturday on Labor Day Weekend . There were plenty of people on and near the Deception Pass Bridge - but I don't think most people get off the main Highway 20 route and it was raining south of there - so Rosario Road was very quiet. 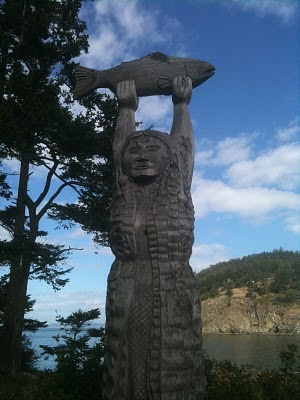 The Maiden is part of a really interesting Native Story. This site has pictures of the carving process.
________________________________
Marine Drive has grooves in it that caused my front wheel to wander and the Concours handles pretty good on the highway. It'd be worse on a Sportster. The grooves look like a "feature" more than anything temporary. I wonder if those grooves are there because there are expensive houses on the scenic bluff overlooking the ocean and they don't want motorcycles zipping around. In any event it's just a short hop into Anacortes.