Well at least I've discovered the source of the oil leak on my Connie.
Tracing the source of a small oil leak on a motorcycle with the plastic fairings, hoses, wiring and the generally tight spaces of the engine installation is a bit challenging. It took awhile with lots of wiping and then shining a bright light up into the engine area but I'm 95% sure it's the oil seal in the water-pump. I can see a very slow drip of oil seeping from the water pump weep hole.
A new water pump is $160 from Murphs or $196 from the dealer, but I'm going to try replacing the oil seal and 0-rings before I shell out that dough.
Based on this COG C10 Technical Page - Water Pump Seal article I think I can fix this oil leak without replacing the water pump so I ordered a water pump oil seal and 2 o-rings from Ron Ayers for $11.50 plus $5.00 shipping. 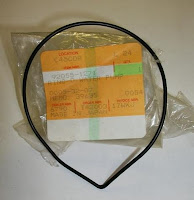 Based on the advice in the forums I'm going to use some red loctite (permanent) to glue the oil seal in place and Brakleen to clean the shaft up so the loctite will stick.
I have to drain the coolant (just did that a month ago or so) and engine oil (was going to do that anyway) as part of this job.
I'm going to replace the clutch push-rod oil seal while I'm at it since I'll have that cover off anyway and have the seal on order from Cheap Cycle Parts.
I'm looking forward to having the Concours road-ready so I can try out the new camping gear I got for Father's Day. I got a Jetboil, Big Agnes Seed House 2 Tent, Sleeping Bag and Sleeping Pad from REI. Nice stuff...thank you R and R and B.
Note: Once I got the water pump removed I realized I didn't need the 92055-1271 RING-O,WATER PUMP. You would only need that o-ring if you were going to open up the water pump. You don't need to open the water pump to replace the oil seal.
________________________
I'm also waiting for a CAT 8M4991 o-ring I ordered from e-Bay to use as a throttle lock. This is another cheap (frugal) idea from motorcycle forums.
The idea is the o-ring fits over the groove between the throttle grip and the bar end weight and provides enough friction to keep the throttle in place so you can relax your right hand on long rides. You can still twist the throttle closed in an emergency and you can roll the o-ring off after you've relaxed/stretched your hand a bit.
I ordered two so my bike will be symmetrical with two yellow o-rings on both handlebar ends - and I have a spare. Two o-rings were a little less than 5 bucks including shipping on e-Bay. I'll take a picture when I get them.
Posted by Jack at 8:20 PM