Can Someone Play Rope With Me? 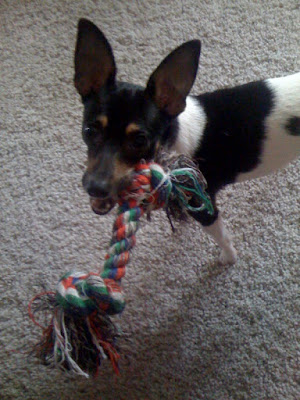 Edgar the TFT loves to catch his rope. I have to put it up on top of the refrigerator sometimes so I can do something else. Usually he's okay with putting the rope up for a rest but sometimes if he isn't ready to stop playing catch he stages a sort of food riot where he kicks his water or food bowl around spilling water or dry dog food around in the kitchen.

He loves catching/chasing balls too but we had to stop that in the house because he also loves to "bury" balls under furniture and pillows and then try to dig them out which tends to cause a lot of scratches on furniture and feathers flying from pillows. With the rope he can't push it under stuff as easily.

Toy Fox Terriers are small but sturdy and love to play. Edgar can jump a couple of feet in the air and run and dart around really quick (really really quick). He thinks he owns this neighborhood and can be a bit of a diablo, particularly around other people or dogs he doesn't know. He's still a pup and will learn to be sociable and play nice. I've been watching The Dog Whisperer trying to get tips on how to take care of a very active little dog and we are working on walking with a leash.

I'd highly recommend a Toy Fox Terrier to anyone who wants a small dog that can live in a city environment. They like to go for walks of course but they get a lot of exercise just running around the house, up and down stairs and jumping from one piece of furniture to another.