Linux Mint and a New Laptop

I installed Linux Mint on my laptop yesterday.

I've tried a variety of Linux distributions over the last 5 years and found Ubuntu worked the best for me. That is until recent releases of Ubuntu began using the Unity user interface.

As often happens with software development, things continue to change - into either something better or something different. Unity was different for me.

Like most things in Linux this is all highly customizable. Here's a YouTube video of Cairo Dock on Ubuntu.

I think the bottom line is Ubuntu is great, Windows is great, Apple is great, and I wanted something different so I'm using Mint.

Talking about the best - operating system/software/laptop/computer/motorcycle oil/coffee/phone is like discussing the Worlds Best Cup of Coffee. Lots of other things fall into that highly subjective "whatever you like is best" realm...but I digress. I like Mint fine so far. It's nice and clean, and not totally unlike an older version of Windows in some ways.

Here's screenshot of my desktop - 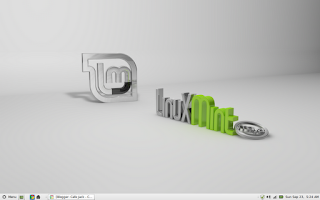 Mint was easy to install. I didn't have a DVD or DVD burner so I loaded the ISO file on a memory stick and booted from that. Like many Linux distributions, Mint is a "live distribution". This means that you can use it before actually installing it on your computer. After you've driven it around the block a few times you can install it or just reboot you computer from the hard drive and use your other favorite OS.

It took less than 30 minutes to download and have Mint up and running on my computer...so very simple and fast.

My Dell Inspiron E1405 laptop is getting a little tattered around the edges. It's 6.5 years old so that's pretty ancient I guess. It still works fine for me - I upgraded the RAM at one point and installed a faster 500 gig HD after that. The case has a small crack in it and one of the USB ports is broken; the latest problem is a Toy Fox Terrier jumped on my lap and laptop and broke off my 7 key. It's not fixable. It's still functional but I think it's time for a new laptop. This Dell Inspiron with a 14 inch screen weighs in at 5 lbs. It's not built to withstand much abuse. It's good enough for a laptop you leave at home or carry carefully to wherever you are going.

My old Fujitsu Lifebook laptop was built like a rock but was relatively expensive. My work laptop. a Dell Latitude E4200 is also rock solid. I throw it in the saddle bag of a motorcycle most days of the week and it's never complained. It has a SSD HD so that may help some. It has a 12 inch screen and weighs less than 3 pounds so it's a good portable laptop.

I think a laptop with a screen size between 12 and 14 inches works for portability and readability. 12 being a little on the small side and 14 being a little on the big side. The 15 inch screen laptops are too big in my opinion to be carried with you. I ordered a 15 inch Fujitsu once and returned it after I realized how big those things are. The 15.6 inch screens must be cheap though since it seems like the good deals tend to be that size.

I ordered a  Sony VAIO S 13.3″ laptop. The one I got is a pretty basic model - but it has a couple of things I want; not too big and not too ugly. 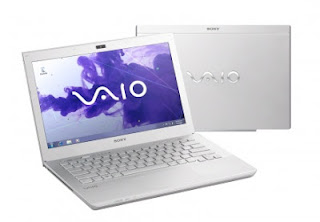 I upgraded to 8 Gigs of RAM and the 500 Gig HD. I've wanted to try Sony laptops for awhile and was considering either the Vaio 13.3 laptop or a Mac.

Since it's a custom build, my new silver Vaio (Vio) won't be here until October. I'm looking forward to trying it. I have my memory stick with Mint all ready so I can set it up to boot into Windows or Mint. I'm going to try using Windows as my main OS for awhile and see how that experience goes since I haven't used Windows on a home PC for quite awhile.

I gave up on Windows for home use about 6 plus years ago when I was trying to reload Windows on a laptop. I had multiple Windows installation CD's around the house, none of which had the right code for my laptop. I'd bought all the software for 3 different Dell laptops we used at home/school, and it really bugged me that I couldn't re-install it on my laptop because of the security. The other problem - if I recall correctly was that Dell didn't include the complete Windows OS on a CD or DVD with some laptops. Sort of a problem if you want to install a new HD or need to re-install Windows for whatever reason.

With Linux you can download a distribution like Mint in 15 minutes using a torrent and install it in another 15 minutes - no problem with codes since it's free. I'm not sure how that business model works but if you've never tried a Linux distribution I'd recommend it if you have a bit of tech savvy and curiousity about what's available.

I guess that's enough geek talk for now. I think I'll meander up to the OYSTER RUN '12 and look at all the motorcycles that will be in the streets of Anacortes today.