On to Port Hardy

It's sunny and warm this morning. I'm not in any big hurry to get going - what the heck I'm on vacation. I have to get up early tomorrow morning to be in line from the ferry to Prince Rupert at 5:30 am.

I plan to meander up to Campbell River where one of my favorite authors Roderick Haig-Brown lived and fished.

It's only a little over 200 miles up to the Bear Cove Cottages I'm staying at in Port Hardy so I have plenty time...nice.

I'd like to live in a place where you can burn your yard... 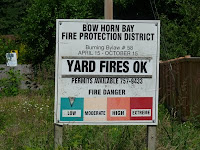 Inflatable Santa was out on his inflatable bike... 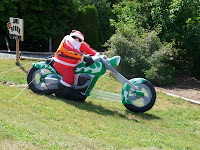 It's really pretty on Highway 19A going north, but I'm not taking pictures of the water and mountains, because I've found landscape shots unless they are really spectacular are usually kind of boring. Plus even though something looks spectacular when you see it - I can almost never capture the scene with a camera.

I tend to go pretty slow sometimes because I have to stop to take pictures of weird things...but I better get out of here. It's still 150 miles or so to Port Hardy and it's about 2:30 pm.

The road near Campbell River is really scenic riding along the water. Nice drive all the way to Port Hardy. You start to head inland but there's some nice snow capped peaks around you. The speed limit is 80 to 90 to 100 Kph in the isolated spots (which is most of the road once you head inland)...it should be 80 mph. The road is in great shape and hardly any traffic.

Three eagles swooped down in front of me while riding to Bear Cove. One of them had a fish in his mouth and dropped it out of surprise I guess. I waited around to see if they'd come back to retrieve it but I guess they got spooked by the near collision with my motorcycle. Here's a picture of the fish - 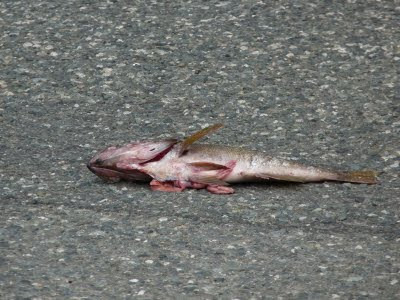 The road up to Bear Cove Cottages is steep and rocky. No place level to park until you figure out you have to make a hard right behind the cottages. Trying to maneuver a bike that weighs 700 some odd pounds on a steep rocky slope is challenging. I had to go up to the top of the hill and come back down to get into the parking area.

The cottages are more like luxury cabins that seem to be brand new - they have wifi (slow), satellite TV, jacuzzi, picture window overlooking the ocean and mountains, and lots of eagles.

I gotta get to bed early tonight I'm getting up at 4:30 am to be at the ferry. Luckily the terminal is about a mile down the road so not too long a drive.