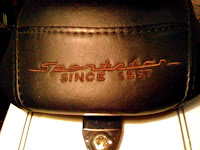 I've put about 2000 miles on my motorcycle in the last 5 weeks. I've been going in circles a lot and haven't gotten much more than 100 miles from Everett. If I would have driven in a straighter line I could have driven to Juarez, Mexico or Madison, Wisconsin. Maybe next year.

It's interesting to think about what makes a good motorcycle and why people buy motorcycles and ride motorcycles. I've been lurking around the Harley forums and some owners like to modify/customize their bikes not so much for riding as for the aesthetic pleasure. That's cool - you see some real works of art.

Other people like the speed factor. That's cool too - but when you get to be my age enough speed tends to be something quite a bit less than it is when you are younger. Before I bought this latest motorcycle I was thinking about putting a motor on a bicycle, but I wasn't sure if it would have enough power to pull me up a hill. So my sights (powerwise) were set pretty low.

Some people like to belong to a club or define themselves by what mode of transportation they use. That's not really my cup of tea - I'm happy riding a bus, bicycle, train, airplane, subway..walking etc. But I don't think of myself as a member of the occasional bus riders club. I'm not really brand or mode sensitive when it comes to transportation.

My definition of a good motorcycle is one that runs. I like all sorts of motorcycles but I'm especially pleased when I see some old beater type bike that someone keeps running and uses to commute or for touring. There's just something about the functionality and keeping something old running that appeals to me. Not that a nice decked out BMW, Gold Wing or Harley isn't cool too.

I was thinking about putting on a different seat, shocks and saddlebags but the more I think about it I think I'll just leave my bike as it is and see how long I can keep it running without having to take it to a mechanic.

I just have to stop looking at other motorcycles on Craigslist...there's a 2007 Suzuki Bandit 1250 with various upgrades and 2900 miles on it for sale in Ellensburg for $5900. That looks like a nice bike and a good price - but it doesn't make sense to have two motorcycles sitting in the garage over the winter. Maybe next spring...

Harley Davidson motorcycles have a long history, having been around since the early 1900's.

My maternal grandfather John Williams had a Harley in the 1940's, and he and my grandmother belonged to a motorcycle club that would go on rides around Wisconsin and stop to have picnics and socialize. He was a machinist and quite mechanically inclined - he built my mother and her sister an electric car and built his own speedboat, among other things.

He was killed riding his motorcycle when a car load of women who had been drinking stopped to make a U turn in a blind spot in the road. I'm sure it was very sad for my mother, her sister and mother to lose a father and a husband. My grandmother was an independent sort and worked as a school teacher for many years, after moving back to Montana from Wisconsin, where she'd worked in a defense plant during WWII.