What's the Real Federal Deficit? And How Do We Pay it Off?

According to this USA TODAY article written in August of 2006 -

The set the government promotes to the public has a healthier bottom line: a $318 billion deficit in 2005.

The set the government doesn't talk about is the audited financial statement produced by the government's accountants following standard accounting rules. It reports a more ominous financial picture: a $760 billion deficit for 2005. If Social Security and Medicare were included — as the board that sets accounting rules is considering — the federal deficit would have been $3.5 trillion.

The official number is based on "cash accounting," similar to the way you track what comes into your checking account and what goes out. That works fine for paying today's bills, but it's a poor way to measure a financial condition that could include credit card debt, car loans, a mortgage and an overdue electric bill.

The audited number is based on accrual accounting. This method doesn't care about your checking account. It measures income and expenses when they occur, or accrue. If you buy a velvet Elvis painting online, the cost goes on the books immediately, regardless of when the check clears or your eBay purchase arrives."

We need to create good paying jobs that will increase tax revenue and we need to reduce spending.

It helps to have fiscally conservative members of Congress like the Blue Dog Democrats but we also need to reduce military spending for weaponry, and maintaining a large overseas military presence.

We spend almost as much money as the rest of the world combined on the military and military-related activities. 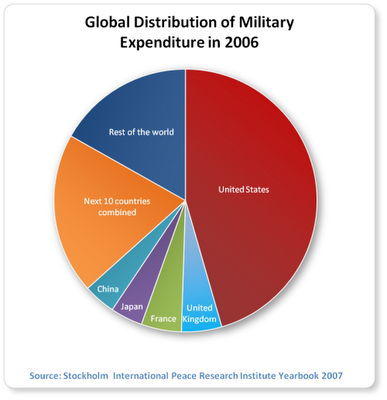 The government says defense spending is 20% of the federal pie chart, but other estimates say defense-related spending takes up 54% of our tax dollars.

Our current model is based on the cold war of the 1950's and a WWII model - where powerful nations were at odds. If we transition to an international police-based model where we treat terrorists as criminals we would be better able to deal with the guerilla-style terrorist threats to national security of the 21st century and reduce our military-related spending considerably.